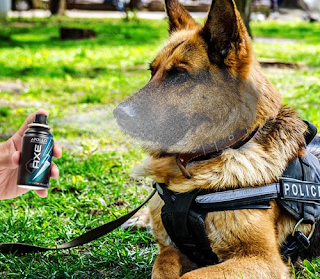 While Covid mandates continue to restrict large gatherings of people in most states, some bro-country artists have taken to having secret house concerts to avoid the watchful eye of the law, and the certain scorn of social media. Many of these shows have gone undetected, with the singers and audiences quieting down and hiding at first report of police in the area. As a result, law enforcement has had to employ a new tactic to bust these illegal concerts: Axe-sniffing dogs.

“We’ve found that teens and men who enjoy this kind of music tend to wear offensively strong smelling body sprays such as Axe, so we’ve trained Buster, our drug-sniffing K9, to identify similar odors.” said K9 Unit Lt. Parker Davis of the Smyrna Police Department. “It’s working like a charm so far.”

The SPD has already shut down 2 Chase Rice concerts, a Chris Janson show, and a couple of other up-and-coming bro-country artists' parties. “There were 25 jacked-up pickup trucks in this cul-de-sac, so we knew something was going on when we followed up on a complaint from neighbors, but the area was completely silent when we started investigating,” said Davis. “Knocks didn’t root anything out, but Buster just smashed through the fence of one yard… you should have seen the wallet chains gleaming in the street lights as they all ran for it.”

One of the illicit concerts shut down in Tallahassee also led to arrests for crystal meth and prescription drug possession with intent. “That was one of those ‘hick hop’ shows, I think his name was Upshirt, Upchurch, something like that.” laughed Goins.