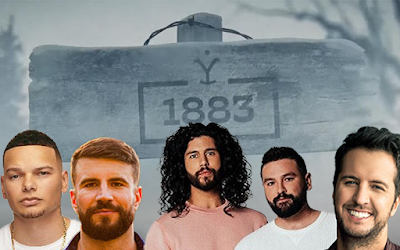 As filming began of Yellowstone prequel Y: 1883, the production announced on Thursday that it would be taking a decidedly different approach in the show’s musical direction. Music supervisor Robert Bones said unlike the original series, which leans heavily on gritty Americana and folk music, this edition of the franchise would be soundtracked with the likes of Sam Hunt and Florida-Georgia Line. Though anachronistic, the accompaniment’s purpose is to draw in soccer moms, contractor dads, TikTok daughters, and Carolina squat sons.

“We’re shooting for a different demographic on this one,” said Bones. “1883 will have a  struggle-filled tone, so the music should be offsetting; think Walker Hayes, think Dan + Shay. The subject matter will be dark and challenging, so the music shouldn’t add further stress. Just as country music evolves with the times, so shall the western soundtrack.”

Y: 1883 will follow the Dutton family’s early journey west to Montana. Tim McGraw, Faith Hill, and Sam Elliott have been tapped to star in the drama.

“And yes, to let the cat out of the bag, there will be a few duets from Tim & Faith,” said Bones. “We have these megastars, why not use them?” An early exclusive scene shows the duo as Margaret and James Dutton singing the hit “It’s Your Love” from afar, as James battles native Americans in western Missouri and Margaret deals with sick children back at the temporary homestead.

Another scene has Luke Bryan’s “Kick the Dust Up” in the background as a buffalo stampede roars through the Nebraska plains, adding a whimsical air to the violent encounter.

Yellowstone’s musical director Andrea von Foerster was originally set to helm 1883’s sonic template, but she was unhappy with the pop-country palette. “Yeah, f**k this s**t, I told ‘em,” laughed von Foerster. “I wish them luck but it’s like if da Vinci had done the Mona Lisa in finger-paint.”