This weekend marks another UFC pay per view event, so we check in with Brother Jeremy Pinnell. Fresh (well, maybe not so fresh) off a Thursday night gig opening for Dale Watson in The Bluff City, our partner was a little sassy this morning. (Note to self: don’t hassle a dude about deadlines if he could choke you unconscious.)

Since last time, I’ve had a chance to listen to The Wilder Blue's self-titled album, and Ian Noe's River Fools and Mountain Saints. These seem like some hot rocks to me. Your thoughts?

I absolutely love that Ian Noe record. He’s an amazing songwriter. I haven’t had too much time to dig into The Wilder Blue but the harmonies are killer and they sound like some talented folks. It’s also 9:00 a.m. and we’re in Memphis so I’m a little out of it. I’ll apologize for my answers after being berated by you last night for a slow turn around. 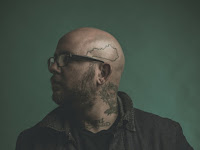 Moving right along…Say you're a presenter at The Americana Awards. You make what you think is a harmless remark about a nominee's wife's bald head (my hypotheticals are laced with irony.) Husband approaches you, winding up for an open-hand slap. What's your best jiu-jitsu counter move, knowing you have to keep the show flowing?

Hahaha! If I saw said guy approaching, I’d probably close the distance. I’d maybe shoot a double leg and go side control to mount.  I’d control the position until security came or just try to keep distance. But I feel like that is a pretty threatening act which would call for immediate action. 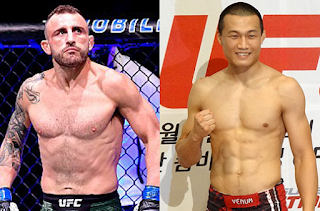 I wasn't crazy about this UFC 273 card at first, but you kinda changed my mind. I think the Korean Zombie is kind of a weird matchup for Volkonovski. That could be a good fight, with the Zombie's length. The rematch of Yan vs. Sterling ought to be lit – given the controversial way Sterling “won” the belt.

And Burns/Chimaev has potential for a great fight. What are you looking forward to in this PPV?

I was stoked on this card as soon as I saw it. Volkonovski is a banger but Zombie is a murderer. I think everyone knows Sterling doesn’t deserve that belt; he said it without saying it when they put it around him. His pace in the last fight was awful. I’m not a fan. Yan is obviously a way more measured fighter.

Also, Chimaev - Burns is gonna be a war. There’s so much hype with Kazmat right now and, I’m really stoked on that.

If you were able to competently play one instrument besides acoustic guitar, what would it be, and why?

I’d probably play piano, if I could be a modern-day Mickey Gilley or Jerry Lee. Maybe you can buy me some lessons for Christmas.