California to Ban Country Songs about Gas Powered Trucks by 2024 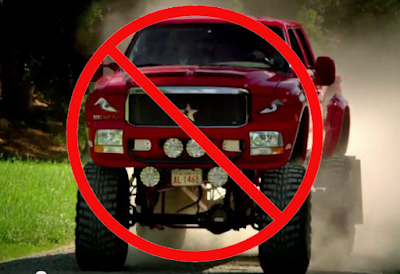 Governor Gavin Newsom today announced that he will aggressively move the state away from its enjoyment of pop-country songs about gas-fueled pickup trucks. He issued an executive order requiring all new pop-country songs about vehicles, especially trucks, to explicitly mention that they are zero emission after 2024.
The entertainment industry (including music) is responsible for more than 7% of all of California’s carbon pollution, all while jacked-up, coal rolling, nut-swinging pickup trucks continue to spew toxicity into the atmosphere.

“We simply can’t have all these catchy, vibe-filled, vaguely country songs glorifying using these beasts for ‘fun’ when they are literally responsible for Donald Trump, I mean, pollution.” said Newsom in a prepared statement for the press. “Therefore, we are directing record labels not to promote songs about feet on a dashboard, or having CIS white sex under the stars in a truck bed, or mudding in a pasture with a beer in the cupholder without letting the listener know that the vehicle is an EV.”

He went on to lament the irresponsibility of Nashville in idolizing such vehicular monstrosities. “I listened to Cali Country Y102 today for an hour, and literally every song had a truck in it,” Newsom continued. “Just think of the good we could do if all 15 of those songs replaced ‘F-150’ or ‘Silverado’ with ‘Lightning’ or ‘Endurance;’ every mullet-headed white boy in community college would suddenly think it was cool that Morgan Wallen got busy in a Rivian, or whatever.”

Free speech advocates have threatened legal action following the executive order. “While we also cringe at songs with dudes talk-singing in a southern accent about cruising for women in their squatted 70,000 dollar pickup trucks their dad bought them, this is certainly unconstitutional grounds the governor is walking on,” said Jenni Perkins, a spokesperson for the ACLU. “We will be strange bedfellows with the republican bros for once, it appears. Yee Yee!, or whatever they say.”

California will be leading the nation in this effort, in hopes of removing garbage from both the environment and the airwaves.

At press time, many conservative California country fans agreed with the order, but they’d be damned before they ever admitted it.