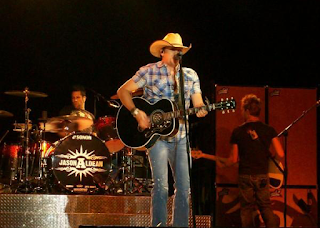 Midway through yet another mid-tempo rocker about partying in some country-approved locale, country star Jason Aldean reported Thursday that he is entirely unsure which song he is currently performing before a large crowd at the Charleston Coliseum. "It has a lot of rocking riffs, slamming drums, and the crowd is singing along, but I don't know what song this is," said Aldean, who added that he is confused because every song he performs is just a slightly different version of the last song.

Aldean lets the crowd take over for a few lines so maybe he'll find his spot, but to no avail. "I hear them singing 'fire in a field' and 'feet on the dashboard' but the last song had a 'fire by a truck' and 'feet in a pasture' so it's not helping any," he complained, "I'll just walk around and gesture at people in the crowd while I pretend to play my acoustic guitar for a minute."

By the time the ripping guitar solo takes center stage, Aldean is fairly sure he's figured out which Jason Aldean song he is presently supposed to be singing. "It's got to be 'My Kinda Party'... or 'Set It Off'... or 'Kick the Dust Up'... no wait that's a Luke Bryan song," fretted Aldean.

Aldean frantically searches the stage for a set list as the guitarist finishes up a slightly adjusted version of the solo from the previous song. Unable to find the schedule, Aldean just sings the lyrics from the second verse of "Just Gettin' Started" and no one even knows if it's correct or not, but it fits, and the crowd is drunk and doesn't really give a shit.

Inspired/Stolen from this Onion article.
The latest nonsense from Farcer at 9:00 AM 0 complaints