With Jon Pardi's "What I Can't Put Down" struggling to find footing on the charts, I came to this realization. You can pretty much guarantee that if Farce the Music really likes a mainstream country single, the song will not have a whiff of the top 10 on the country charts. Don't believe me? Here are some commercial country singles we enjoyed, and their peaks on the US Country Chart.

New Video: Emily West - Made for the Radio

Check Out This Venomous New Tune from Emily West

Wow. (One NSFW word scattered throughout) 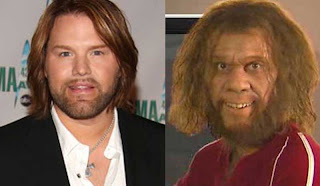 It has often been said that James Otto looks like a Geico Caveman. Here's proof. (Note: Rita had this one last week, but I already this doppler created so... great minds think alike) 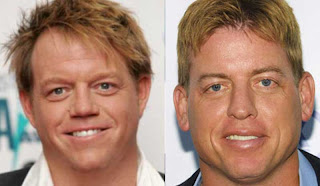 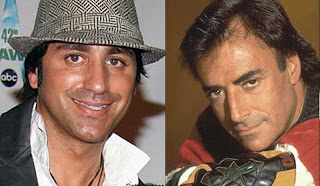 Steve Azar, singer of "I Don't Have to Be Me (Til Monday)" and the current hit "Sunshine," looks a helluva lot like Thaao Phenghlis, who is probably best remembered as Tony DiMera from Days of Our Lives. 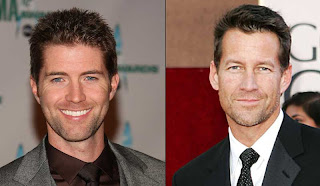 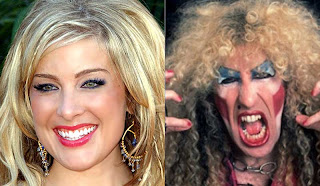 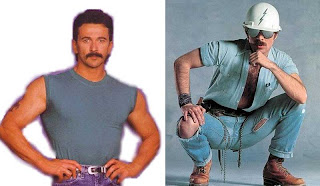 Sorry Aaron, but yeah... it's the Village People construction worker for you.
The latest nonsense from Trailer at 4:00 PM 0 complaints

Did this back and December and it was such a rousing meh, I thought I'd do it again. Here are some quick "reviews" of all the songs your local country station will be running into the ground next month.
1. Jason Aldean - "Crazy Town"
This dreck tosses what little goodwill I'd gotten about the guy based on his strong single "The Truth" right out the window. This is a rock song about becoming a country star. And not a very good one at that. Its emotional depth on the subject of making it in country music runs about as deep as Cowboy Troy's street cred. D
2. Miranda Lambert - "The House that Built Me"
Some have called this the single of the year and who am I to argue? Let's just hope Miranda has built up enough glad tidings with radio that she can get this fine ballad played as much as it deserves. A
3. Blaine Larsen - "Chillin'"
Blaine's groovy little summer song seems to have been ripped from Kenny Chesney's songbook. His likable drawl and delivery will probably make this a hit, but as laid back top-down songs go, this is middle of the pack due to a heavy dose of cliché. C+
4. Tim McGraw - "Still"
Moderately more exciting than its title. "Still," it has an interesting enough sonic texture to give it a little more weight than much of McGraw's output of recent years. C+
5. Tyler Dickerson - "Tell Your Sister I'm Single"
While I'm a little uncomfortable that it seems young Tyler is making a play not only on his ex's sis but also on his ex's mother in the chorus, this is a catchy song from a strong new talent. It's also a male-centric attitude song, something sorely missing on country radio in recent years. B-
6. Jimmy Wayne Ft. Whitney Duncan - "Just Knowing You Love Me"
Another slice of soft rock banana bread from the master of milquetoast (Carb overload!). Luckily, this one's not as bad as most of his previous singles and the compliment of Whitney Duncan's vocals makes this fairly listenable. I just wish J-dub would get some testosterone replacement therapy. C
7. Kenny Chesney - "Ain't Back Yet"
This Springsteen-esque country rocker is more satisfying than Chesney's recent work by a pretty long stretch. It's another reminiscing song added to a long resume of 'em, but a lot less annoying than say, "Young." Surprisingly, I think I like this. B
8. Taylor Swift - "Today Was a Fairy Tale"
Treacly, schmaltzy, cliché, lilting, formulaic, but somehow I can't bring myself to hate it. It'll make millions (more). C-
9. James Otto - "Groovy Little Summer Song"
I'm glad he reminds the guitar player where to start his solo, because he may have just dozed off during the early part of this happily lazy, uh, groovy little summer song. Sure it's a release calculated for maximum timeliness, but just the fact that it's not a hard rock song celebrating bonfires and cutoffs sets this apart from the usual summer dreck. B
10. Jason Sturgeon - "Simple Life"
Simple song. Repetitive, fairly dull and without a single chance at heavy rotation, though some of the instrumentation is nice and Jason's voice is good on the ears - kind of a mix of Radney Foster and Toby Keith. C-
11. Brandi Carlile - "Dying Day"
A token folk-alt-country addition to this month's edition of the promo only disk. For the rare few stations that will play something outside the mainstream. While I'm an apologist for and a big fan of folk-alt-whatever-country, this track is actually fairly listless and unmemorable. Brandi's a big talent in a small genre though. C+
12. Jerrod Niemann - "Lover, Lover"
Well, this is an unexpected surprise. It's bouncy, catchy and commercial while still managing to sound like nothing else on the dial with its bluesy front porch clap-along sound. Excellent track! A-
13. Uncle Kracker - "Smile (Happy Hour-Deluxe Version)"
I'm not sure I can tell the difference between this version and the version that played on pop and AAA stations a couple months ago. The fact that it didn't have to be changed much, if at all, to be presentable to country radio speaks volumes. This was a guilty pleasure the first 3 times I heard it. Since, not so much. C-
14. Laura Bell Bundy - "Giddy On Up"
I'm still in the honeymoon phase with this song. I'll hate it and myself for kinda liking it after a couple of weeks, but damn if it's not catchy and so bad it's good. This generation's "Whose Bed Have Your Boots Been Under?" or (more likely) "Achy Breaky Heart?" It's Broadway country custom built for line dancing. B (2 weeks from now grade - D)
15. Jaron and the Long Road to Love - "Pray for You"
Wow. Here's attitude for you. I was about to write this one off as a Jimmy Wayne wuss-song (though the over-wrought organ intro should have clued me in) until the chorus punched me in the stomach. I like the resurgence of gonaditude on this compilation, but this might be a little harsh with the hopes for God to call down vengeance with flower pots and blown tires. Still, it might elicit enough of a "hell yeah" response in listeners to smooth over the fact that Jaron's praying physical and emotional harm upon his ex. B
16. Emily West w. Keith Urban - "Blue Sky"
See this review. B+
17. Lee Allen - "Settle Down"
Cute hook. A voice reminiscent of John Michael Montgomery. The song is pretty reminiscent of some of JMM's non-ballads also. It's not bad. Probably not enough oomph to conquer the top 30 though. C
18. Coldwater Jane - "Bring on the Love"
The second act on this compilation from my home state of Mississippi (the first being Tyler Dickenson), these girls slide pretty easily into the spot SheDaisy vacated with their hit drought (if that spot still exists). Thankfully, Coldwater Jane is far closer to country than SheDaisy ever thought of being. B-
The latest nonsense from Trailer at 4:01 PM 5 complaints 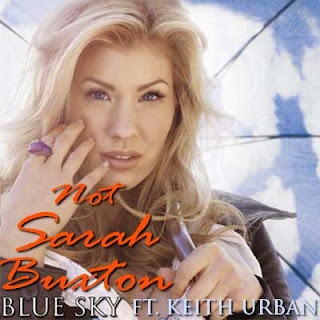 AhhhMAzing! (5 Stars) - LOVE IT! LOVE HER!I live in Nashville and see so many unappreciated, amazingly talented artists that deserve to be heard...Emily West is one of them. I think her time has come and she is on the verge of being a big, big star!!!! Such a beautiful song!!! GET THIS SONG NOW!!!!! PS if you ever get the chance to see her live - GO! She is so much fun and great in convert!!!!

Calm Down.... (3 Stars) - Emily West is the next Faith Hill! But she has horrible stage presence. Saw her open for Luke Bryan at Joe's in Chicago and she was extremely hard to take seriously. Amazing vocals. Just wish she'd calm down and let the audience enjoy it. Can't wait to see what she grows into though. Keep an eye on this one!

A new female artist releasing a sparse, sad ballad at a time when new female singers aren't exactly filling the Top 40 is a questionable career choice to say the least. Adding Keith Urban as a backup vocalist (and a prominent name on the song title) doesn't hurt prospects, but still, if it's not an exceptional song, one of this ilk would likely be on and off the charts inside a month.

Happily, this is an exceptional song, well written and beautifully performed by one of Nashville's most engaging young talents. Emily West has become known early in her career as funny and frankly honest, so one might expect her to be more suited for Brad Paisley-style laughers and chick-attitude songs. With Blue Sky, she proves to be quite adept at a tearjerker without artificially pulling the heartstrings with overdone high notes and overwritten lyrics.

Here, West informs a cheating lover that she can't be his blue sky, his happiness, anymore. Her voice also reveals that her own blue sky is now obscured by storm clouds. She wills the metaphor to sound fresh where it would have fallen flat coming from a lesser vocalist.

Hopefully, "Blue Sky" is only the beginning for Ms. West. Along with Sarah Buxton, she may finally break through Nashville's recent glass ceiling for performers of the fairer sex not named Taylor Swift.

(Foregoing the checklist for this edition)

The latest nonsense from Trailer at 1:10 PM 0 complaints