This is a special extra long Jeremy & Trailer collaborative Christmas edition of Little Known Facts. Some artists get two facts... 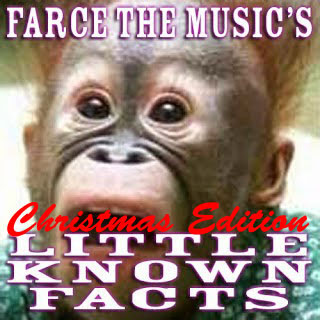 John Rich celebrates the holidays by adding a couple ounces of eggnog to his mug of bourbon.

A Christmas Story is Gary Levox's favorite Christmas movie.
He always cries during that emotional scene when the dogs eat the Christmas dinner.

Santa decided to skip the Levox house this year because someone always beat him to the cookies.

Shooter Jennings doesn't wear red coats during December
because someone always tries to put him on a shelf.

Shooter Jennings had to delay his upcoming album "Countach (for Giorgio)"
until next year to allow him to spend more time working in Santa's workshop.

With his new contract Chad Brock is experiencing a resurgence of popularity
but unfortunately some of the children pee on his lap while giving their wish list.

Every year around this time Farce The Music is overwhelmed with emails asking to post Scotty McCreery
on a shelf pics. 99% of those come from addresses ending with @scottymccreery.com.

All Luke Bryan wants for Christmas is his two front ...testicles.

Santa will have a reindeer shit on the floor of anyone that posted #WhoIsChrisStapleton in 2015.

Jason Aldean only watches the first 20 minutes of How the Grinch Stole Christmas.

Instead of receiving coal in their stockings this year, badly-behaved
country singers will be forced to share a dressing room with Mojo Nixon.

73% of Brantley Gilbert fans are more concerned with making
the warden's nice list than they are with Santa Claus' list.

Old Dominion hopes they get switches for Christmas, because they're perverts.

Bucky Covington is hoping the mild weather continues throughout Christmas. He says it sucks
when your spray bottle of water freezes while cleaning windshields at a Nashville red light.

The only item on Martin Shkreli's Christmas list is a Kane Brown album.

Christmas is a special time of year that can bring a smile to anyone's face.
Except Kenny Rogers anytime after 2011.

Bucky Covington always gets kicked out of the record label's Christmas party
for being too drunk and because he doesn't work there.
The latest nonsense from Farcer at 10:30 AM