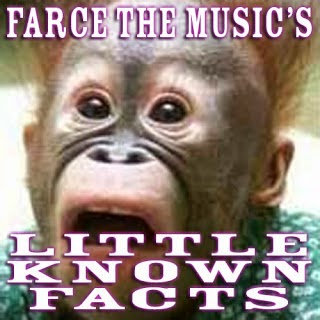 ACM Awards organizers last Sunday scrambled to find a Rascal Flatts voice track when
Gary Levox walked onto the stage with a 12" chicken parmesan sub instead of his microphone.

The "H" in Scott H Biram is for Hoobastank and he is also
a founding member and the original keyboard player of the band.

Chase Rice chose his name from the punch line of an offensive joke about Asian people.

For the 2015 model, Chevrolet will be offering a special edition "country music" Silverado
that will feature two wheel drive with "4X4" stickers and oversized tailgate cables to
accommodate a higher dancer weight.

When James Bonamy recently stopped by Taco Bell for their new breakfast,
the lady at the window said "Hey! Aren't you…. Jim from afternoon shift?"

The stick figure family on the back of Tim McGraw and Faith Hill's vehicle is actual size.

Vince Gill might sing like a girl but he can apply a mean front facelock if you piss him off.

When asked about the controversial tweets from Luke Bryan's camp concerning
the ACM Entertainer of the Year Award, George Strait replied,
"Who's Luke Bryan and what in the hell is a tweet?"