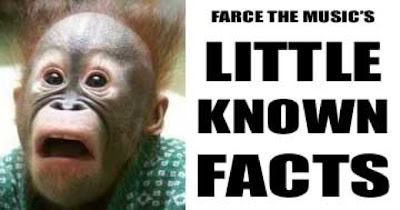 Plans for a life size Justin Moore action figure were scrapped by Hasbro when the only prototype was dropped down a heating vent.

Even without music Gary Levox would be wealthy due to him selling his chocolate fountain design to Golden Corral.

An Australian newscaster once asked Jamey Johnson what a honky tonk badonkadonk was. Anyone that has information on the whereabouts of the reporter, please contact the Sydney Police Department.

Colt Ford controls the market price of all poultry in the USA based solely on his appetite.

Due to his preferred choice of pants, Luke Bryan's penis is six inches wide but only 1/16 of an inch thick.

Brantley Gilbert spent over $42,000 on removal of misspelled tattoos in 2012 alone.

The guys in Florida-Georgia Line were actually born in Delaware and Rhode Island, respectively.

Scott Borchetta's hair care routine consists of a regular professional wash and conditioning (the latter in the blood of a half dozen puppies).


*Thanks to Jeremy Harris for most of these.

The latest nonsense from Trailer at 9:00 AM