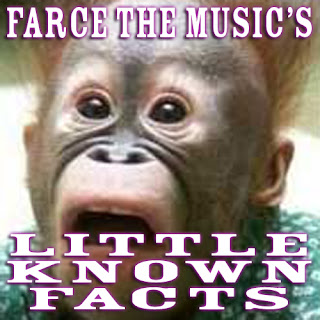 Tyler Farr had to leave his hometown of Garden City, Missouri over
fear of being Baker-acted by local mental health officials.

When asked what his biggest accomplishment since moving to Nashville was,
Justin Moore replied "Using the big boy potty."

When he returns home covered in glitter, Luke Bryan's wife wishes he had been at a gentlemen's club.

No buffalos were harmed during the recording of Buffalo Gospel's album
We Can Be Horses but three bison were castrated.

Devil John Moonshine recently selected Shooter Jennings as their spokesperson
because Davis Daniel was too busy with his music career.

The Snuffleupagus costume was recently stolen from the set of Sesame Street
forcing Colt Ford to play the part of Snuffy for three episodes.

When asked about the lasting effects of her ended relationship with
Brantley Gilbert, Jana Kramer said, "Its nothing a little cream won't clear up."

A high amount of sun exposure is harmful to your body and can alter brain function.
Example 1: Kenny Chesney.

Farcethemusic.com creator Trailer started the site after
visiting tasteofcountry.com and realizing he couldn't do worse.

Jackson Taylor's band The Sinners are all former members of 98 Degrees.

By Jeremy Harris
The latest nonsense from Farcer at 11:30 AM