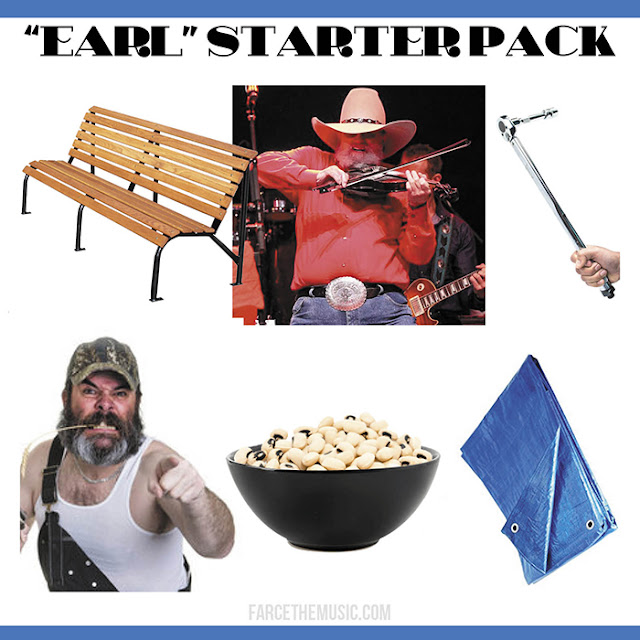 If you ever besmirch Reba

What are your qualifications to be in this indie-folk band?

When there's a Morgan Wallen fan in your row

Oh, you don't like Tyler Childers anymore because he expressed one belief that's different from yours?

When I hear two seconds of a Dan + Shay song 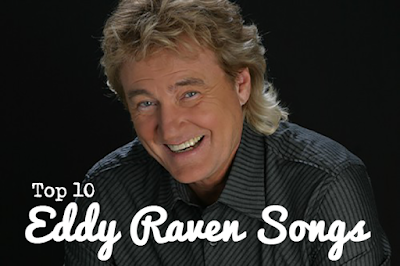 A while back, I mentioned a few Eddy Raven songs on Twitter, and Trailer admitted unfamiliarity with most of his catalog. Having just done enough research on Eddy Raven to have gotten his Wikipedia article ranked as a "Good Article" (thanks to his wife, Sheila, for her help!), I put together this top ten list.

If you know an Eddy Raven song at all, it's probably this one. It seems to be the one I hear most on classic-country formats. And for good reason: its carefree, "get away from it all" theme about escaping your broken heart with a trip to Mexico is quite hard to resist. It's a perfect fit for Raven's Caribbean-Cajun sound and gently rolling delivery, and it's hard not to see why this was his first #1 hit.

A cover song twice over. Co-writer Larry Willoughby (Rodney Crowell's cousin) and the Oak Ridge Boys both cut in 1983: the former as the lead single for a little-known Atlantic album, and the latter as the B-side of "Love Song." While Larry's version has a similarly laid-back vibe, Raven escalates the song with a Caribbean-influenced production that somehow manages not to clash with the theme of trying to call her up and apologize. I especially like the end, where the chorus continues underneath him as he shouts at the operator.

Although Raven didn't write this one, it still shows his attraction to exceptional lyrics. The connection between being a woman's "right-hand man" and then getting dumped for someone who puts a ring on the left hand -- sure, it may have been done before, but it's just such a natural transition into the line "don't let your right hand know what your left hand's doing." The jangly, acoustic guitar-driven production really adds to the simple but effective story of getting dumped for another guy.

All of Joe's coworkers are jealous of his trip to Mexico, which Joe himself sums up in a laid-back carpe diem observation: "Women are made to love / Money is made to spend / Life is something, buddy / You will never live again". Raven's spoken-word ad-libs at the end help further the tone ("Think Joe's wife knows about that yet?"), and his laid-back delivery fits the song far better than the original Nitty Gritty Dirt Band version. I wonder if this was intended to be a perspective-flip of sorts to "I Got Mexico?"

The obligatory Dennis Linde pick. I'm a sucker for a good accordion song, and a song about playfully stalking your lover (a common theme for many Linde songs -- remember "What'll You Do About Me?"). Yet another song originally cut by another artist -- Billy Swan, whose version just sounds like "I Can Help" with an accordion -- this one feels like a natural fit for Raven, who brings more energy and flavor to the proceedings without stripping the lightheartedness away.

Yes, a lot of country music songs have done this exact same trope: finding the right woman has finally saved a wayward man from his cheatin' ways. But this one shines with its alliterations ("dancin' with those demons," "dealin' with the devil") and its delightful Merle Haggard-esque vibe (to the point that Merle himself actually cut the song a few years later), it was clear even before his major-label days that Raven had a knack for songcraft.

Maybe it's those jaunty "no no no’s,” but there's just something I really like about this song from a melodic and production standpoint. It really lends an upbeat, maybe even optimistic air to the song's central theme. He's broken up because she left, and wants to reclaim those same good feelings from the past. Simple on paper, but just like so many of his songs, the individual elements -- sharp lyrics like "now that we're through, I could use another you," the catchy melody, and Raven's voice -- really elevate the material.

Raven's last top-40 hit before the "Class of '89" flattened him and his peers, and a great song to go out on. The underlying sailing metaphor is extremely well-done ("I might sail forever and never find that island again"), leading to some creative references such as the Southern Cross. The moody production and Raven's emotive voice are given plenty of room here, allowing for a very distinct song. It kind of reminds me of an even better take on the already exceptional "Second Wind" by Darryl Worley.

2. "Who Do You Know in California"

Even at this early point in his career, Raven showed an unusual way with lyrics. Uncommon phrases like "hiding behind the morning paper" and "trying to find a real good answer, one that wasn't too absurd" set the tone for a man who's been outed in an affair after the mistress calls. (Raven said that this song was inspired by a story he had heard from a fan.) Even more interestingly, the song never resolves the scenario, a move that certainly helps the replay value: does he ever answer her question? How does she react?

A bit of an oddball pick, I'm sure. But last year, I heard this song on Prime Country for the first time probably since I was 3, and I could immediately remember everything. Nostalgia aside, I just love everything about this song: that incredibly catchy synth riff, quite possibly the only country song to use an orchestra hit (outside the dance mix of "Boot Scootin' Boogie"), and more "playfully stalking" lyrics courtesy of the ever-underrated Bill LaBounty ("Either way, honey, you're gonna be mine / If it's got to be later, then how about later tonight?"). This song just has so many ingredients that make me feel happy every time I listen.

Honorable mentions: "Bayou Boys," "You're Never Too Old for Young Love," "Peace of Mind"
The latest nonsense from Farcer at 10:30 AM 1 complaints