Welcome Back From the Netherworld, Joey Allcorn 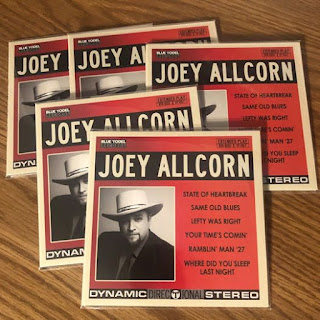 Joey Allcorn is a walking ghost. Stuck between the ether of our compromised reality, and a netherworld surrounded by spirits, Allcorn is a mystic, soothsayer, and as he's always said, born a few decades too late.

The music he writes isn't concerned with the current, what popular culture considers "country" whatever side of the traditionalist aisle you adhere to, instead, Allcorn, is a living relic. This man seeks out the forgotten players, who can tell you the names of the folks who etched their names in the walls of country music long ago. He's a historian and someone who keeps the keys to the past in his back pocket.

On his new e.p, The State of Heartbreak, Allcorn doesn't disappoint, because he's incapable of doing that, but instead leads the listener toward the dark halls of what we're looking for, internally. That's why his music works. You can hear it with your grandparents, believe it in a room full of buddies, but it's also malleable. It has depth. It's not a sad rehash like so many country traditionalists. Allcorn will always get the Hank Williams comparisons, but where's the harm in that? If you can yodel and howl, then yodel and howl, this music is from the back hills and the hollers, don't let the repressions of radio fool you, this is music that's appeared within the bacteria of his gut lining, the DNA twisting through his genome.

On this release, Allcorn toys with some Kris Kristofferson, some Leadbelly, and with a little Faron Young. Allcorn has never been shy about who he looks to as an influence, and all of his selections work in the spirit of The State of Heartbreak. It's hard to even have a critical ear toward Allcorn, you know what you're getting, and it's always consistent. He's like the video of the guy throwing basketballs two-handed and never missing. The timbre, the attitude, and the intent are forever stitched into the music, Allcorn is a perfectionist in that he's incapable of putting out a dud. He'd rather hide in the shadows.

For a while, Allcorn disappeared. He'd occasionally pop up on social media, reminding us through his various channels like "Honky Tonk Heroes" or his direct feed that he can rattle off more about country music that half the people whose names are hanging on the walls of the Opry. Having him back is fitting for the culture, he pays attention, he throws events, and his heart is always in the right place. Joey Allcorn is a hell of a singer and musician, but at the core of all things, he's a blue blood ambassador of country music who's done countless things to show old men they're not forgotten or to continually exercise the wrongs of the past.

We're lucky he's back in the saddle, the music needs more yodeling cowboys like him.

Grab a download of The State of Heartbreak off his site: joeyallcorn.com
The latest nonsense from Farcer at 11:30 AM 1 complaints

When you just drank 3 Monsters, punched a wall, and you're ready to hit that Florida-Georgia Line concert

When you just drank 3 Ensures, checked your Depends, and you're ready to hit that Bellamy Brothers concert