Jeremy Harris went on the Outlaw Country Cruise last week and got several videos of the performances. We're also hoping to get some sort of write-up of events from Mr. Harris, but don't count on it from that scoundrel. Anyway, here's the first of his recordings we'll share.

Shooter Jennings will be late for at least one show because
Jessi Colter will forget to sign him out of daycare.

The Band Perry are a late addition to the cruise.
Luckily for them they all got the same shift in the kitchen.

There is a waiting list of seagulls that want to play
in Chicken Shit Bingo with Dale Watson.

Crew members will have to move the Mojo Nixon swear jar
to the center of the ship to prevent capsizing.

Nobody will wonder where Luke Bryan is. They also won't give a shit.

Brian Kendrick will not be on RAW on February 27th.

The cruise will last several additional days after
Elizabeth Cook overtakes the captain.

When asked if he's bringing any produce aboard,
Eddie Spaghetti will hope they mean vegetables.

Brantley Gilbert tried to get on the cruise but you have to
have a bank account to purchase tickets.

Pirates around the world have warned each other not to mess with this cruise.
Reason: Billy Joe Shaver
The latest nonsense from Farcer at 10:30 AM 0 complaints 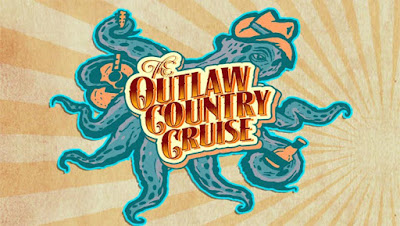 
When I first heard about The Outlaw Country Cruise I was beyond excited. The lineup was in its infancy at the time and preorders hadn't started yet, but my wife and I knew we were going. As time passed the lineup grew and even had a substitution at one time. When the time came, we were loaded up and ready to spend 20+ hours in the car heading south. Ok, maybe that last part sucked. Once there though, that would change.

Once on board it was time for buffet trip number 1 then off to show number 1. While still docked, Sarah Gayle Meech started things off with her honky-tonk stylings. After her set there was a short break then the launch party began. Weeks before the cruise, some people were debating about whether Sixth Man, who runs the cruise, had make a good decision by selecting The Mavericks to play during this time. It didn't take long to figure out not only was this a good decision, but it was the perfect decision. Who couldn't been better to set the standard and provide the energy to leave Miami better than The Mavericks? Nobody, that's who.

After the sail away party things pretty well flowed as numerous shows took place with sometimes five shows going on at once in different areas. The hardest part about this entire vacation was picking where to be and how long you could be there until it was time to head to the next show. With so many different bands playing there was always something I wanted to see.

Like… Blackberry Smoke playing an acoustic set with special guests of every act knowing the words to Snake Farm. I'm convinced Ray Wylie Hubbard is very similar to Beetlejuice but instead of having to say his name three times to get him to appear, you say it once then hit the first two chords of Snake Farm. Boom, Ray appears! I heard him at least 5 times doing the song with numerous bands and I wish it would've happened 50 more times. Ray wasn't the only one making special appearances. Hell he wasn't the only one coming up for Snake Farm. He joined Paul Thorn and Waymore's Outlaws (with Shooter Jennings) during one of the best shows of the trip. Roger Alan Wade jumped up and performed a heart-felt version of the Waylon classic "You Asked Me To" and Jesse Dayton also joined in on this show. My god, what a talent. Not only a great song writer, but it'd be hard to find a better guitar player and when he sings George Jones. Damn! Some artists who weren't even booked on the cruise popped in for performances. Jonathan Tyler joining The Band of Heathens was a great surprise.

Several weeks before the cruise, Sixth Man had sign ups for many on cruise activities with limited area available. These included Battle Shots, best beard contest, and listener's lounge interviews with SiriusXM hosts among other great events. The main reason I'm highlighting these events is because these are the ones I participated in. Battle Shots was a no-brainer. A modified version of Battleship where every hit you received results in you taking a shot. The game was played tournament style and on a boat where drinks are very expensive, free drinks are a bonus. Teams were comprised of five players so my wife, my brother in law and myself teamed up with two of London's finest players, Ben and Lucy. Not only did we get about 20 free shots each during gameplay, we won that son of a bitch. What's the reward for winning you ask? A free margarita poured and placed in you hand at that exact moment you think you can't drink another drop, a 'golden' cup, and a $30 gift certificate per player for the artist merch store. Not a bad deal. Shortly after Battle Shots was the best beard contest. I had been asked earlier to enter but I'm not one of those guys that has a beard to be cool. I'm just lazy and don't like shaving. For some reason while drinking numerous shots and getting three invites from Sixth Man staffers during this time it seemed like a great idea.

Best beard was judged by Sarah Gayle Meech, Rosie Flores and Elizabeth Cook. When each contestant went on stage they were asked for their name and where they were from. I've been on cruises before and I know what reaction Ohio people get. Always one idiot who yells out "O-H" and many other idiots who finish it. Not gonna happen this time. "Hi, I'm Jeremy from southern Ohio and Ohio State fucking sucks!" Guess what.... Rosie Flores is an Ohio State fan. I received her lowest score to that point. I was the 12th person up and she wasn't helping. Sarah and Elizabeth came through for me with respective scores of 9 & 10 for a total score of 27 out of 33. Elizabeth described me as a "party in the front and a party in the back, which led to a drunken turn around.

In the two listener's lounge events my wife and I attended, we were treated to great happenings. In one show we saw Mojo Nixon interview Jim Dandy from Black Oak Arkansas. These were supposed to be interviews with some acoustic performances. Jim Dandy was so long winded that Mojo barely could speak and only got three questions in during the hour. It was funny watching Mojo squirm trying to get a word in. The other we attended featured Steve Earle interviewing and backing up vocally for Lucinda Williams. What a rare treat to witness this and to hear acoustic versions of songs from her latest album.

You can watch some of the videos Jeremy took here: https://www.youtube.com/user/ohbuffalo38/videos?view=0&shelf_id=1&sort=dd
The latest nonsense from Farcer at 10:30 AM 1 complaints