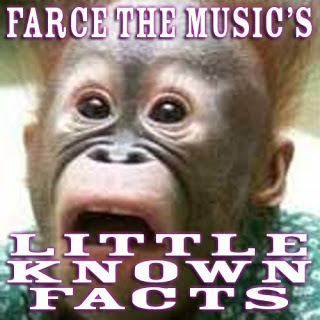 Kenny Rogers recently announced his retirement from singing,
five years after the last time he moved his mouth.

A 2012 FCC ruling requires all FM stations that broadcast mostly traditional sounding
country music be placed on a frequency that ends in an even number.


Paparazzi recently caught Jason Aldean in a public restroom
with his jeans pulled down, attempting to unwad his panties.

In 2014 Gary Levox donated his belly button lint to Eskimos in upper
Alaska to make new clothes for the village's children.

Tyler Hubbard's favorite instrument is GarageBand on a MacBook Air.

Luke Bryan was late for his newest music video shoot consisting of pretty girls in lifted trucks
due to his Volkswagen having a flat tire on the way to pick up his skinny jeans from the tailor.

Ryan Adams made his choice of which album to cover by drawing a name from a hat.
Besides Taylor's 1989, the other options were Chad Brock's Yes!,
2 Live Crew's Back at Your Ass for the Nine-4, and Trixter 's self-titled debut.

Taylor Swift was so excited when someone told her Ryan Adams
was covering her album, she Googled his name immediately.

Sam Hunt is so tired of people asking why he considers himself country,
he's just had t-shirts with "$$$" printed on them to point at during interviews.

If Jason Isbell got a free beer for every time somebody asked about
his sobriety in an interview, he could… wait, that's just not appropriate.

Shooter Jennings' next release will be a folk album about hard times in the digital era
entitled Hey Brother, Can You Spare a Bitcoin?

If you stare into a mirror and yell "Yee Yee" three times,
a drunk skank with a 'Merica tube top will appear and give you a handy.

Thomas Rhett recently had keyless entry installed in his home because he can never find the key.