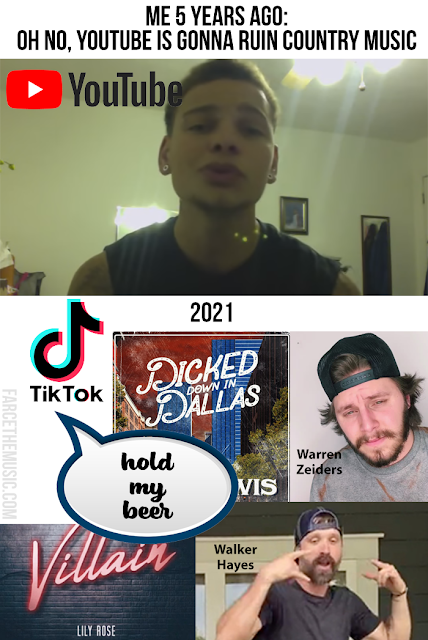 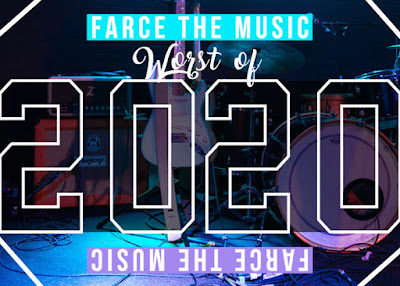 While far from his worst set of lyrics (I doubt he'll ever make anything worse than "Ready Set Roll"), it's just another generic, uninteresting booty-call where the only other ingredient I really have to work with is the unlikable person singing it. And that alone causes me to read a lyric like "the show your girls all come over for" as more misogynistic than I probably should. So maybe if someone else were singing this, you might find "Big, Big Plans", "Cool Again", or "Beers and Sunshine" in this slot instead. But as long as Chase Rice continues to be Chase Rice, I will continue to make room for him on worst-of lists.

14. "I Love My Country" by Florida Georgia Line

Good news: the mixing isn't quite as bad and the Auto-Tune is a lot less prevalent. (It really says something when switching to Corey Crowder is an improvement.) Bad news: it's still an annoyingly pandering country-pride anthem that brings absolutely nothing new to the table. Sure, it's not the worst thing they've ever released lyrically. But FGL's been running on fumes for a while, and between this and "Long Live", I don't think that "'Round Here' but with less overproduction" is going to be anywhere close enough to reverse their downward slide or even endear them to the non-fans.

I wish that interesting ideas weren't wasted on lazy, pandering list songs. I could pick apart every entry on this list, but the anachronistic conservatism of the first verse (divorce doesn't exist, respect your elders, blah blah blah) probably rubbed me the wrongest way. I'd much rather hear a story about the grandpa in question and why the narrator wishes that he never died -- in other words, I'd much rather hear Randy Travis' "He Walked on Water". (Okay, that one's about a great-grandfather. Close enough.) The sincere vocals and country-sounding production are the only elements keeping me from moving this song any higher.

One of my least favorite tropes is when songs string a bunch of metaphors or similes together without a narrative theme. And boy, does this one have it bad: pages turned, digging for treasure (and somehow switching to records halfway through), wildcards, lemonade... pick a topic and stay with it, already! And what do bluebirds have to do with the rest of the song? (It's apparently an homage to an obscure poem. Never would have guessed, especially since that just comes the fuck out of nowhere.) Finally, what the hell does "turn twenty cents into a ten...rhyme a dime 'til it all makes sense" even mean, other than "this song is a total mess"? (A well-sung mess, but a mess nonetheless.)

Sam Hunt doesn't usually grate on me because, as flagrantly un-country as he is, most of his songs are at least competent. The first one that I actively disliked was "Body Like a Back Road", and the second one is this. He has literally just met this girl, and he already wants to drag her back to his family like a cat dragging a dead mouse to its owner. Yes, sometimes you really do find the right one on the first try. But come on, don't you think you're rushing? Maybe it's just a stylistic thing or the lingering stink of "Back Road", but he seems less like he's found an instant match and more like he's just rushing to get his dick wet as fast as possible.

Dustin Lynch continues to baffle me. "Cowboys and Angels" promised twang, but ever since, he's just been the clean channel to Jason Aldean's overdrive. While not his worst lyrically, where this song fails for me is in the overbearingly mechanical overly auto-tuned talk-singing (at least he used real drums this time), combined with the vastly dissonant hook. Okay, what about your momma? How does she even factor into this? Nope, it doesn't matter, I'm already bringing up more about the breakup. Maybe if the song sounded better, or maybe if it came from another artist who at least has some semblance of effort in his work, I wouldn't be quite as hard on the clashing tone.

Probably the best-produced song on this list. I love the sound of Hammond organ and Wurlitzer electric piano, and after the pop bombast of his past few albums, it's nice to hear Keith Urban with fewer layers. What I don't love is motivational and/or religious clichés, and boy does this song have them in spades. "Bear the cross". "Being saved". "See the sunshine". "Baptized". "Warmth of your smile". "Amazing grace". I honestly do want to like this song because of how pleasant it sounds, but the faults of the lyrics are just way too strong for me not to notice them.

8. "One Margarita" by Luke Bryan

As of this writing, Luke Bryan is a 44-year-old married man with two children. So his hyper-fixation on alcohol-infused spring break parties makes him feel immature and stunted. The weird vocal processing on the chorus is just about the only thing that gives this increasingly tired formula any semblance of life. Is it tone-deaf in the wake of the COVID-19 pandemic, though? On the one hand, it was written long before then and I can see the argument that it's just escapism. On the other hand, the kind of people who would use this song as escapism are likely the kind to hold giant parties with no concern for social distancing...

7. "Nobody but You" by Blake Shelton feat. Gwen Stefani

Blake didn't seem to mesh with Miranda, and he really doesn't seem to mesh with the Hollaback Girl. Maybe it's the overbearing wall-of-sound production (I'm not a Scott Hendricks fan, but this is seriously the worst I've ever heard out of him). Maybe it's the extremely unoriginal lines such as "I don't wanna live without you, I don't wanna even breathe". Maybe it's Blake's delivery, which sounds strained on the high notes and completely phoned in on the rest. Maybe it's the utter lack of chemistry between him and Gwen. Whatever the case, I do wanna go down any other road just to get away from this nonsense.

Aldean has been on autopilot for so long that his last four albums have barely even registered for me. This song is just the same formula for what feels like the hundredth time: big minor-key power chords, soaring chorus, references to good ol' boys and girls drinkin' beer and blaring AC/DC (sorry, Trailer, I just can't get into them at all). Hell, even the references to speakers and obligatory omission of verbs to sound "cool" were recycled from the equally forgettable "Lights Come On". He does still have decent songs in him ("Any Ol' Barstool", "Drowns the Whiskey"), so his continued formulaic pandering is just eyerolling.

This one doesn't piss me off quite as much as it did Trailer. I will admit it does have quite a lot against it: generic party-in-the-woods lyrics that can't even come up with a decent hook; paper-thin vocals that say "I got a record deal entirely because I wrote a few songs that happened to be hits for someone else"; trap snares for days; and me wondering what the hell kind of mind control this guy has over Zac Brown that he was so able to thoroughly ruin what used to be one of the brightest spots on mainstream radio. At least Niko knows what an acoustic guitar is...

Trailer put this one on his list so I had to check it out. And it charted, so now I have to include it too. Yay. Where do I even begin? I mean, I know what to expect from Upchurch from all of my coworkers who think that blaring hick-hop while drinking White Claw gives them street cred. But who is Katie Noel? Oh yeah, she's some Z-list auto-tuned trap-snare nobody. Put the two together, add probably the first-ever name drop of Justin freakin' Moore, the eight billionth "hey girl" hook this decade, and token references to cars and nights, and you have an unlistenably bad mess that makes "Take Back Home Girl" sound like "Golden Ring".

Considering how thoroughly I thrashed this in the "Worst of the 2010s" list, I bet you're surprised this is only #3, huh? Well, spoilers: the #2 and #1 songs didn't exist yet when I made that list. I already eviscerated this excessively lovey-dovey, emasculating, calculated piece of garbage last year when I made that list, and my opinion has not changed. Dan + Shay are still nauseatingly uber-romantics who can't get through a single sentence without gushing about their wives, and Justin Bieber is... well, he's still Justin Bieber. Say what you will about "I Should Probably Go to Bed"; at least it's about something else besides being all doe-eyed over your woman.

2. "More Than My Hometown" by Morgan Wallen

I don't get Morgan Wallen. All of his other songs just go in one ear and out the other for me, so at least this one got a reaction. Being an old-fashioned homeboy is not in and of itself a bad thing. But this song's hook just reads as rude and dismissive. Maybe it wouldn't chafe as much if he gave at least some kind of well wishes to the girl he's leaving behind, or even some detail as to why his hometown is so vastly important to him. (And I'm not saying that just because my own hometown went to pot long before I left it...) But as it stands, he just seems like a cranky old man far too stubborn to get with the times. And he probably still isn't wearing a mask.

1. "Dicked Down in Dallas" by Trey Lewis

It's hard to do vulgar humor right, especially in musical form. However, this one fails to deliver on the "humor" part. There's hardly even a setup; just "She left me", and then it jumps into a list of sex acts that all happen to begin with the same letter as a random Southern city. I'm coarse and vulgar enough to ghost-write an entire Bob Saget standup routine, so I'm not pissed off because Trey said "butt-fucked"; I'm pissed off because saying "butt-fucked" with zero context is not a punchline. Combine that with the fact that the premise is nothing but slut-shaming -- just about the last thing a country song should be about post-Saladgate -- and this becomes the last-minute worst country song of 2020 in my book.