Jon Pardi - Heartache Medication
It’s hard to believe a song that starts out with a fiddle is actually a hit in this day and age. Pardi’s country, this song is country, what more do you need to know? It’s not exactly groundbreaking in the lyrical department, but it’s well written and at least copies all the good stuff. I’m really looking forward to his new album. Aside from “Heartache on the Dance Floor,” I’ve liked all Jon’s songs so far.
B+

Runaway June - Buy My Own Drinks
What’s this? Women with a top 10 song? I’m sure some IHeartRadio analyst somewhere is counting this as 3 songs by women for their stats, since Runaway June has 3 members. The song: it’s propulsive, confident, and catchy. It’s also timely. I hope radio will give this group a fair shake on future singles as well; their underrated Blue Roses album has quite a few that deserve airplay.
B+

Lady Antebellum - What If I Never Get Over You
Shut up. I know it’s not very country, and Lady Antebellum is usually reality-show scripted kiss background music at best, but this is pretty good …so leave me alone. It calls back to their early swoony ballads, and for me that’s not a bad thing. Lady A got off the rails a few years ago with unmemorable …uh, songs… I don’t even recall any of them enough to give a fair description, but this seems to be a pointed turn back to what they do best. And it’s a sad song! And there are real instruments! The bar is low these days, what can I say? The harmonies are beautiful though.
B

Chris Lane - I Don’t Know About You
It starts out bad and gets indescribably worse almost immediately. Heavy beats, R&B copycat vocal style, modern slang-y lyrics …but this is (air quotes) country y’all. While I listened to this to write a few words about it, I kept checking over my should to make sure nobody thought I was listening for my enjoyment. The chorus has lyrics nearly identical to several other pop-country songs, as I illustrated in a meme last month. Come to think of it, “country” songs are basically just memes now. Take a format and make slight changes to it and pass it around. As Public Enemy once poignantly asked “Who stole the soul?”
F

Jimmie Allen - Make Me Want To
Jimmie has some talent, and at least a smidgen of promise. However, this song fulfills no promise whatsoever. It employs snap-beats and paint-by-numbers lyrics for typical 2019 mainstream country radio fodder. It’s background music. The chorus has lyrics nearly identical to several other pop-country songs (including the one above), as I illustrated in a meme last month. Come to think of it, “country” songs are basically just memes now. Take a format and make slight changes to it and pass it around. As Public Enemy once poignantly asked “Who stole the soul?” This one’s catchier than Chris Lane’s nearly identical song and Jimmie has a better voice, so I’ll give it a
D

Luke Bryan - Knockin’ Boots
The good: Simple instrumentation, no clutter. The bad: Everything else. Who thought it was a good idea to bring back a bit of 90s slang that only stuck around for 3-4 years and a couple of hit songs from Candyman and H-Town, anyway? That’s wack yo. Circling back around to the simplicity of this song - the lyrics are also simple, but the definition of ‘simple’ that means stupid. I can’t stand repetitive nonsense… boots need knockin’, knockin’ boots… I feel stupid typing that, imagine singing it, imagine enjoying someone singing it.
F
The latest nonsense from Farcer at 10:30 AM 0 complaints 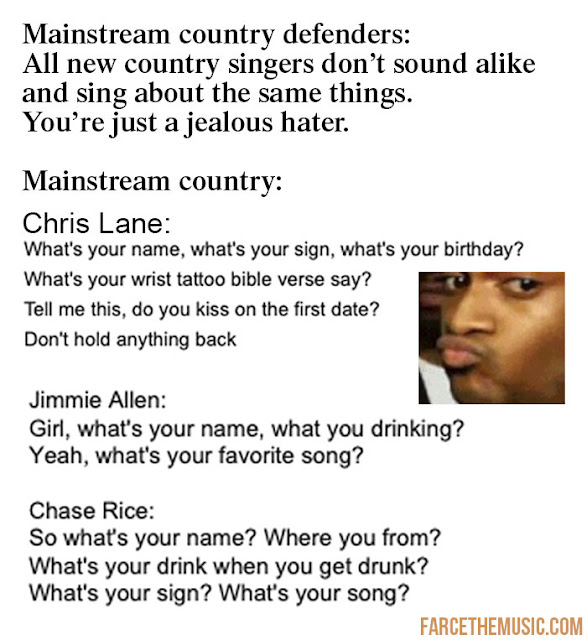 A poop emoji is negative, a strike-thru is positive. 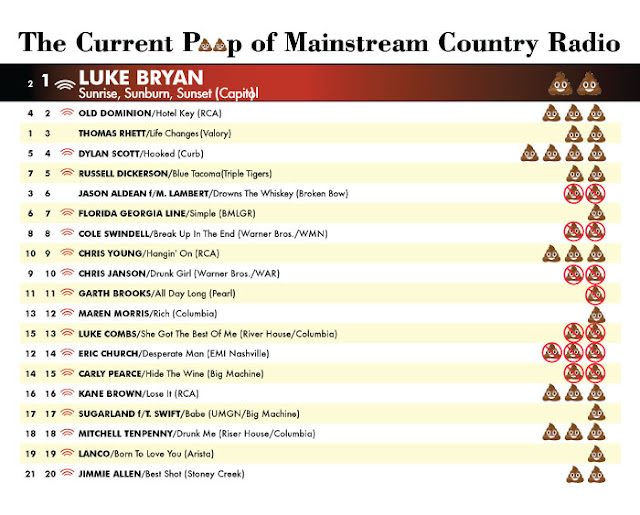 The current Poop Rating of the Mediabase Top 20 is (-14) overall which is a 16 point rise from June (the last time we did this chart). After June's worst score of all time, this is heartening. The best song on the chart is Eric Church's "Desperate Man" The worst is Dylan Scott's pointless "Hooked." There are 2 solo women on the charts and one song by the female-led Sugarland. 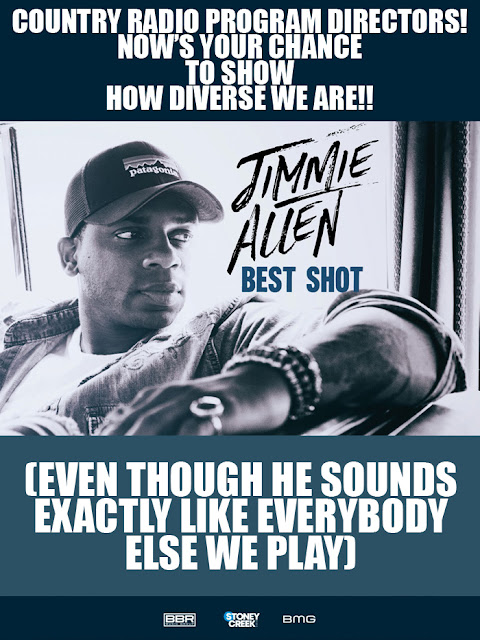